Oroxylum indicum or Indian trumpet flower is an herbal plant and its young fruits, young fruits and flowers are usually served with food. Due to its crispness, softness and slight bitterness. This plant can enhance the taste of food and conceal tastes of food, but provide medicinal benefits in the relief and treatment of various diseases.

Origin and spreading
Oroxylum indicum or Indian trumpet flower is Asia’s native plant that can be found in India, Myanmar, Thailand, Laos, Malaysia and southern China.

It is a small to medium plant and its stem is small and slender with a size of 10-20 centimeters and a height of 5-15 meters. Its stem does not produce branches, but new branches are produced when its apex is cut or after flowering for the first time. Its leaves are sprouted only at its apex so it does not look like a shrub.

Its stem has a spherical shape and its bark is slightly rough and scaly. In addition, its bark is cream and some stems are covered with white blemish of mold. Its wood is turbidly white softwood. Its apex is scarred by the loss of its leaves. Both its stem and branches are brittle.

Flower
This plant flowers as a bouquet at its apex and the length of its peduncle is about 0.8 to 1.5 meters. Twenty or thirty flowers are stacked onto each other at the apex of its peduncle and each of which has a peduncle with a length of 5-15 centimeters.

A budding flower of this plant looks like a tube covered by green sepals and petals. Later, the apex of these petals starts to turn to purple and bigger. When this flower blooms, outside petals turn to dark purple and inside petals are cream. These petals are welded together to form a horn shape and their apexes are not lobed but are undulate and fold down. Their inside area consists of five branches of stamens with many pollens at their apexes while there is only one branch of cartels.

Flowers of this plant gradually bloom from lower to upper ones at the apex of its bouquet and they bloom at night before dawn and fall in the late morning. 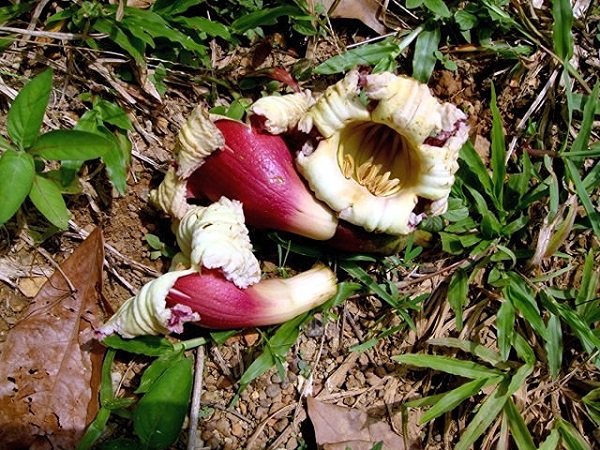 Fruit and seed
Its fruit is flat and long like an ancient Chinese sword with a width of about 5-8 centimeters and a length of about 45-120 centimeters. Its fruit base is narrow, its fruit apex is acute, and its fruit peel is thick. Its young fruit is fresh green and is often eaten because of its crispness and bitterness. Its early mature fruit is green and black and is often not eaten because of its hardness and toughness. Its fully ripe and dry fruit is black and is split into two pieces while there are many seeds stacked and packed inside.
Its seed is flat and the peel of its seed is black or brown that is covered with a thin yellowish white tissue. This tissue serves to help the seeds blown by the wind to fall far away. One peduncle has about 1-20 fruits. 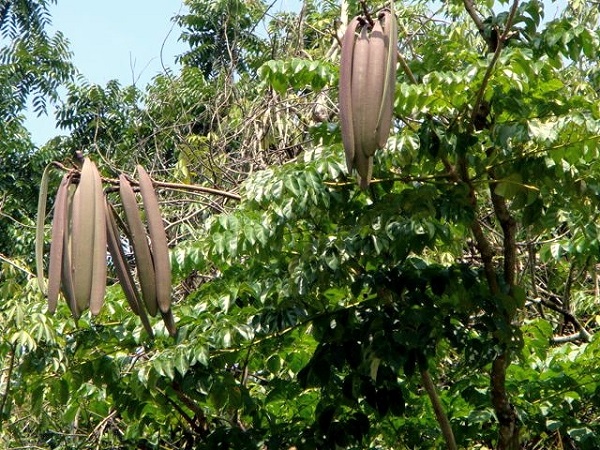 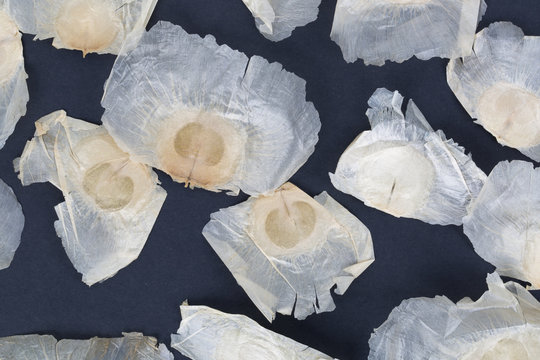 Benefits
1. A one-month-old fruit is the most popular vegetable that is often grilled and served with spicy foods. It is popularly grilled by a charcoal stove, but it can also be grilled by burning fire where its fruit is grilled until its peel is hot, weakened and charred as black scales before scraping off these black scales and slicing for eating. 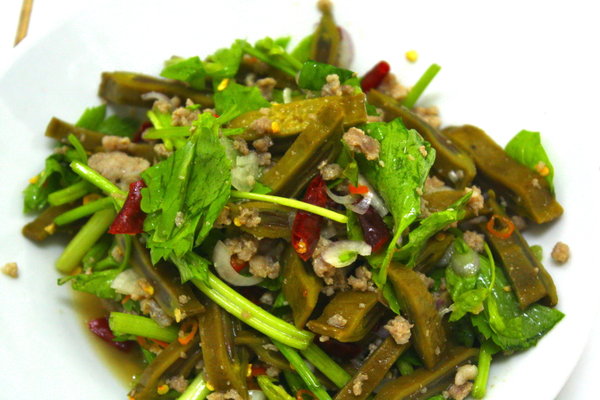 2. Raw leaves and young shoots are often eaten by local people or are also grilled and served with spicy foods because they are bitter and crisp as same as its young fruit. Its young leaves and shoots are not too much eaten because it is necessary to let these shoots grow and flower later. However, these young leaves and shoots are often cut so that its stem produces more branches.
3. A blooming flower is often eaten as same as young fruit and shoot, and only a blooming flower that has fallen from the stem, rather than a blooming flower that is still on its peduncle, is eaten. This blooming flower is often boiled and served with spicy foods, and after boiled, it is soft and less bitter than young fruit and shoot. This blooming flower can be regarded as the most delicious part of this plant.
4. Its heartwood is herb and is usually burnt as powdered charcoal to mix the gunpowder. Both fresh wood can be burnt as charcoal because of its dryness and its dry timber can be burnt more easily. However, this is now unpopular because this plant has become increasingly rare.
5. A mature fruit is commonly dried and sent to other countries for making as herbal medicines.

In addition to enhancement of bitterness, all parts of this plant can be served with various foods to help conceal excessive salty, sour and sweet tastes.

Pharmaceutical effects
1. Anti-inflammatory activity
According to a study on the extracts of this plant and their anti-inflammatory effects in lab mice where these mice were provided with such extracts and their feet were encouraged for swelling and measured, the feet of these lab mice provided with such extracts were less swollen within five hours, while the feet of mice not provided with such extracts were bigger.
2. Anti-ulcer activity
The extracts of this plant can be used to reduce the amount of acid secreted in the stomach and therefore the incidence of gastric ulcers and the active essence of this effect is Baicalein.
3. Anti-oxidant activity
According to a study of the extracts of this plant and their anti-oxidant effects for DDPH and Nitric Oxide, these extracts can result in IC50 = 24.22 ug/ml and IC10 = 129.81 ug/ml of both substances, respectively.
4. Anti-cancer activity
According to a study on Baicalein, an extract of this plant, for its anti-cancer effects for HL-60, this substance can inhibit HL-60, a cancer cell, more than 50 percent within 36-48 hours.

According to a study on the acute toxicity based on the extracts from peel of this plant given at a maximum dose of 800 mg / kg of mouse, there are no signs of acute toxicity.

According to a test on the toxicity of this plant in terms of mutation in microorganisms at an amount of 2 ml / Petri dish, its extracts have no effect on the mutation of microorganisms.

Growing by seed
This plant is an herb and an asexual propagation method does not always work. Rather, the very popular propagation method with the best result is seeding. This seeding method can be done by choosing the seeds from a mature fruit with dry and black peel. This mature fruit should be kept for 2-3 months before starting the seeding because after the fruit is mature, its seeds go into a dormancy phase for a while. If seeding is performed immediately after its fruit is mature the germination rate is often lower.

The seeds should be planted in the growing bags so that they can be easily moved to the land. These seeds must be brought out of the fruit and dried in the sun for 2-3 days before being planted.

Seedling media preparation and seeding
Seedling media should be soil mixed with organic materials such as farm yard manure compost and black rice husk. However, if it is inconvenient to do so, only farm yard manure can be used with a ratio of soil: manure at 1: 3 before being packed into growing bags. Then, these seeds are covered and watered at least every day until their stems sprout with two joints of leaves. Now, they can be moved into the growing land.

Growing method
This plant is commonly planted in the early rainy season. After its seedlings have two shoots, they will be moved for growing. Its growing space should be 4×4 meters. Growing hole can be created by digging a hole with a size of about 30 centimeters and a depth of about 30 centimeters, putting 3-5 handfuls of farm yard manure and one handful of chemical fertilizers (15-15-15) into the bottom of the hole and mixing them with the soil, and moving these seedlings onto this hole for growing.

Maintenance
After growing, most farmers usually allow this plant grow naturally. If it can erect, it will grow through the rainy season and survive during the dry season. However, in some areas where a large number of these plants are grown or they are commercially planted, the weeds will be removed together with putting farm yard manure around their bases and adding chemical fertilizers before their peduncles sprout. 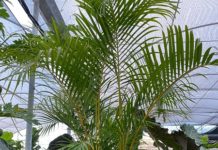 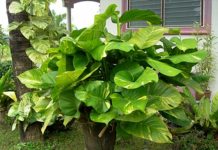 Golden pothos : Benefits and How to Grow